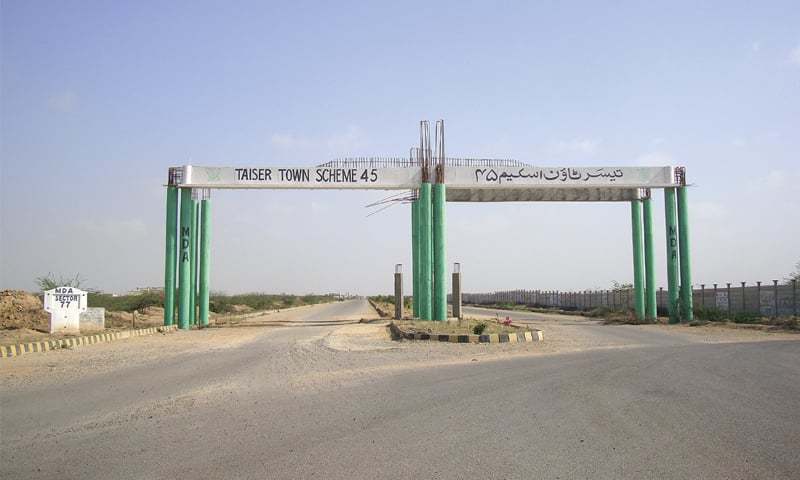 Over the years, Karachi has witnessed rapid development and progress in the construction industry. With its vastness and diversity, it serves about 20 million people. The value of property in almost all areas are going up since people are considering Karachi as one of the most lucrative and productive countries to live in. Of different housing societies and projects, middle class and lower class has always been a target since they portray a significant majority. With the objective to provide shelter to people at lower or middle income level and creating an economic base in the north-east of Karachi, Taiser Town was established in 1986. Initially, it was under the Karachi Development Authority (KDA) but due to mishandling and neglect, it was transferred to Malir Development Authority (MDA) in 1996.

Taiser town Scheme 45 is located in the north eastern side of Karachi over more than 20,000 acres’ land. It is constituted over Deh Mokhi, Deh Nangan, Deh Bijar-ji-Buthi and Deh Taiser and has a capacity for approximately 2.5 million when fully developed. This area is currently begin developed by Engineering Consultants International Limited (ECIL), which is a well-reputed name not just locally but internationally. They have an experience of working in more than 19 countries of the countries, adopting the world’s finest and modern lifestyle and customizing according to the need and requirements of the town.

For a metropolitan city like Karachi, Taiser Town (Scheme 45) offers all the necessities and amenities around the area at affordable prices. From well-furnished apartments, wide roads, provision of gas, electricity and water, educational and health facilities to salons, parks, malls, restaurants, gym and all other things are covered by this area. It has around 96 sectors and several neighborhoods named

The Karachi Northern Bypass (M-10) a 4-lane highway passes through the Taiser Town commencing from the end of the Jinnah Avenue / M M Alam Road, near the junction of the M9, runs for 57 Km with 38 Km through the Taiser Town area. It is an important artery because this corridor is expected to be of great commercial benefit. It has been planned for high rise and high end land uses of international standards for both local and foreign investors.

Current Status of the Project:

Taiser town is a project that failed initially and was re-launched by General Pervaiz Musharaf in 2005. This project involves dreams and hopes of residents of Karachi of building their own homes and providing a security to their families. A lot of people trusted this project as this was initiated under the governance of state. The people who filled out the registration form eagerly and submitted the non-refundable fee of PKR 1,000 to 3,000 are either maids, daily wagers or low income citizens. They invested their hard earned money to get better returns only to know that no such development has been made in Taiser town yet. According to the reports from Dec 2019, local estate agent and thaikaydar have set up a model 80-yard house to attract potential buyers.

According to a report of State Bank, the demand or need of housing units in Pakistan is 400,000 units per year and supply is only 150,000. This leaves the lower income to accommodate their selves in dingy places with high rents or inadequate infrastructure. An average of salaries of daily wagers is 15,000 to 20,000 and average rent of a small place per month is around Rs. 8,000-15,000. To meet the need and accommodate Prime minister Imran Khan proposed building 5 million housing units in a period of five years.

This scheme was also heavily advertised so it could reach the right audience.  Many applicants have even been approached by estate agents — loitering around Silk Bank branches — offering them up to Rs80,000 if they are among the lucky ones to be balloted. The application forms were to be submitted in all Silk Bank branches. Along with Applications for 80, 120, 240 and 400 Square Yards Plot Categories, pay order/Bank Draft Amount of Rs. 10,000 Rs. 16,000 Rs. 32,000 and Rs. 52,000 Respectively be deposited in the name of Taiser Town MDA scheme 45. And with the increase in application, the prices of the plots had gone up too. For instance, a 80 sqYard plot of 400,000 rose to 1,000,000. According to Silk Bank, about 450,000 applicants have been submitted.

Taiser town MDA Scheme 45 authorities claim that over 176,000 filled forms have been deposited so far while the bank is tabulating data from branches all over Pakistan and the number is expected to go up. Of the 176,000 that applied, land possession will be granted to successful applicants within a year, through dispatching letters for scheduled payment of installments to cover plot’s cost

Applicants who have been allotted plots have no idea of where-abouts of their plots. They have been given the location but to their surprise, there is no development and it seems to exist on paper only. Even the employees of the Governor House who were allotted plots under quota have been unable to build homes there due to nonexistent amenities. Those affected are trying to voice their problems through print and digital media.

To counteract the existing problem and facilitate the allottees, Sindh Local Government Minister Saeed Ghani on Friday assured the property owners of Taiser Town Karachi that the overdue development work would be carried out in all the housing schemes of the locality in the next six months to one year.

Sindh government ensured that the people have had bad experiences in the past regarding housing schemes due to the negligence of the Malir Development authority but will be taken care of under their supervision. He also confirmed that the housing scheme is expected to reach its final and complete phase in coming two to three years as per their new plan on the development and construction of Taiser town Scheme 45.

He added that the MDA would be also responsible for completing development work in all its housing schemes of the past so that the possession of plots there could also be given to the successful applicants. The possession of the plots in the new Taiser Town Scheme would be given to the successful applicants as soon as possible so that they could construct their houses, he said.

He said the population of Karachi had been increasing at a very fast pace and the people of the city should be provided hundreds of thousands of residential plots and housing units at cheap rates and on easy instalments.

He added that Karachi would be cleared of the menace of illegal constructions and unauthorized occupation of public land only when the government would provide housing facilities to the people through legal means.

Facilities around the area:

One of the most attractive factor of any residential area is the accessibility and availability of basic necessities nearby. The availability of all sorts of public transport makes the profile of Taiser town heavier. From buses to private pick and drop services, residents of Taiser town have easy access to all of the transport facility. There are several bus stops and stations such as Lyari bus stop, Green Terminal, Afghani1 bus stop, Saddique Akbar Chowk bus stop and Lyari 36 market bus stop connecting Taiser Town with the rest of Karachi.

Considering quality education for the children with every comfort possible is basically every parent’s requirement. They prefer residing in areas where it would be easier for children to travel to the school, college, or institute in lesser time. Taiser town has well-known and reputed schools and colleges such as Amal-e-Danish School, Saadi Public School, Karachi Cambridge School, Lyari Expressway Resettlement Project (LERP) School and Holy Mountain School, Govt. Degree College for Girls (a 23-minute drive in Surjani Town), and Bright Future College of Nursing (a 10-minute drive in Sector X, Gulshan-e-Maymar). It also has Hamdard University on a drive of 15 minutes and other universities such as Federal Urdu University, Sir Syed university of engineering and technology, Ziauddin Univeristy on a drive of 35 to 40 minutes.

From availability of fresh vegetables fruits and dairy products to luxury items, residents of Taiser town have it all. Jamal Golden market, Nana Usman superstore and Northern Awami market are some of the most-visited grocery stores in Taiser Town. There are also some other stores and shopping plazas at short distances.

4. Accessibility to banks and mosques:

There are different mosques in the area that the Azaan-call to prayer, can be heard in almost all of the sectors. It is convenient for residents to head to the nearest mosque at all times. Jamia Masjid Khalid bin Waleed is one of them, located in Sector 51-H in Lyari Basti. It is a make-shift mosque and the Imam of the mosque has appealed the residents for donations to further develop it.

A subsidy of Telenor, a microfinance bank, Tameer Bank is located in Taiser town. However, branches of other banks such as Meezan bank, Allied bank, HBL and MCB Bank is in Gulshan-e-Maymar which is in close proximity to Taiser town.

Like every other developed society and community, Taiser town has health facilities within the area and around the area. Al Huda Trust Hospital is located in Gulshan-e-Noor, which is a popular housing area within Taiser Town. There are several other hospitals and clinics such as tariq memorial clinic within 20-minute drive.

Another factor which is driving the people of Karachi towards Taiser town are the attractions within and outside its vicinity. There are a number of shopping point for men, women and kids. The developers are planning to build malls and plaza in close proximity. Currently, there are Lakhani blessing, Latif shopping center and lucky one closest to this area.

There are several sports and games activities both indoor and outdoor. They have Azeemi Cricket ground, Pak folks cricket ground, Young Patni football club and other gymnasiums, sport clubs and parks. For people who like to look after themselves, there are many options in Taiser Town for self-grooming and care. Areej Beauty Parlor, Asma’s Beauty Clinic and Institute, Bajees Beauty Parlor, House of Beauty and many others.

Moreover, another very important attraction in any area is the options and variety for food dining and take outs. In Taiser tow, there are many restaurants and cafés at short drives with best quality and taste. Additionally, residents can visit restaurants at Super highways which is just 16 minute away. From basic biryani options to complete variety of sea foods, Taiser town allows the residents to enjoy these fruits of life.

The average rates of some sectors in Taiser town, MDA scheme 45 are;

An average house of 5 marla can be bought for PKR 25 to PKR 35 lacs and the price can shoot up to PKR 50 lacs for a 5 marla double-storey house in the most popular societies. N

Karachi is a city of dreams for many. For people could afford it took their chances and fled their rural towns to live and work in the heart of the city, leaving behind clusters of empty or inadeqaute homes. And projects like these are ray of hope for these people. Although the history of this project and Malir development is not very compelling but after the assurance of Saeed Ghani, things seem to work out from the way forward. So far, MDA’s plans sound great on paper and the development has also started. Moreover, people have their hopes tied to Prime Minister Imran Khan.

Moreover, PTI’s government has announced the tax amnesty scheme which allows foreign and local investors to invest to mitigate and reduce the impact of Covid’19 on the economy. Uptil now, PTI government has especial emphasis on the construction industry for economic growth and stability.